“Thank You for being here with me. I see myself here on this planet sharing breath with each of Us- for a purpose- to awaken consciousness for Humanity.” Nandhiji

ARIVEN VISION:  My first dream vision- to save the life of cows and oxen taken to the slaughter house; create farms to utilize the droppings of these animals to grow organic food; to feed hundreds of thousands of hungry and poor. This Vision now is in motion as the Ariven Community with our first sanctuary Amma Sanctuary started with my intent- to have thousands of similar sanctuaries across the globe saving hundreds of thousands of aged retired farm animals; create vast biodynamic farms to grow non-GMO, intelligent food to address global hunger and the curse of Monsanto; develop yoga communities with each of these centers. The net effect of this vision would further the collective goodness of humanity as in compassion, love, sharing and as global family of Oneness. www.ariven.org

WORLD YOGI DAY : My next Vision I saw was the day the world would unite with yoga and all who practiced yoga would realize to attain consciousness. In 2003 I trademarked World Yoga Day and I prayed that this intent of mine would come true. In 2014 Prime Minister Narendra Modiji announced in the United Nations my dream- a day for yoga globally- and when I heard this, I realized I was not a madman thinking too big and that he would accomplish my heart’s dream with ease. Later, the Indian government approached me for my rights and I requested that they consider Mahasivratri, the time observed by all Hindus that is aligned to attainment enlightenment. They mentioned that they had the date already fixed and planned in the United Nations. So, instead of confrontation I chose to compliment the initiative by India’s Yogi leader, Modiji, I changed my vision to World Yogi Day and they announced the grand global vision as International Yoga Day. Through yoga, we attain the highest aspiration of the human, to be the Yogi! www.worldyogiday.org 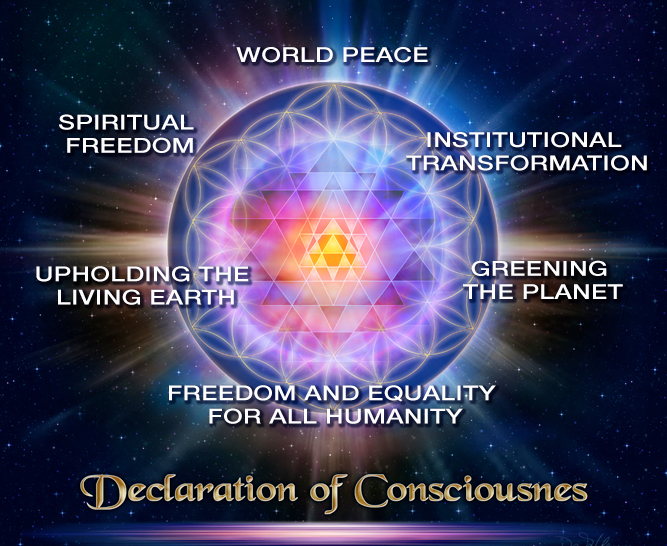 DECLARATION OF CONSCIOUSNESS MOVEMENT:  My larger vision for humanity is the Declaration of Consciousness. I landed for the first time in USA 9 days before September 11th 2001. The terrorist attack in the name of “God” shocked me. Four years later, I conducted the opening fire ceremony for Bhakti Fest, one of the large yoga festivals of USA, on Sept 11. To commemorate this day, I had the 500 or more participants at the Bhakti Fest inaugural sacred fire ceremony to chant the name “Allah” to seek the solution for this madness through Source/God. Instead of hate, I thought love was the solution. In 2012, Bhakti Fest, the idea of the Declaration of Consciousness was born. What if nations set the intent of consciousness for its people as basics of tenets ie, Nonviolence; Women’s equality, Children, Elders, Ethical Commerce, spiritual freedom, Mother Earth etc. as norms that was beyond religion or rather, the true essence of all religions in varied degrees. Religions and societies will need upgrades to be causal of peace. While I envision majority of nations adopt the Declaration of Consciousness, I am working on the foundation of its grass root movement through the online Consciousness Hub that is being built where the power of the WE comes to play. Love each of us to come together as the WE! www.SignDc.org